Karsts exist and cover approximately 15% of the Earth surface. Therefore it can happen very easily that in your hydrological analysis you across a Karst catchment. A general knowledge  of karst environment can be gained by reading the White, 2002 paper but, online you can find also the book by Ford and Williamson, 2007.They are quite comprehensive readings, not necessarily focused on the hydrology of the karst systems and how they can be modeled.

White (2000) propose a conceptual map of karst hydrology that is better represented later in Hartmann et al., Figure 4 (see below). 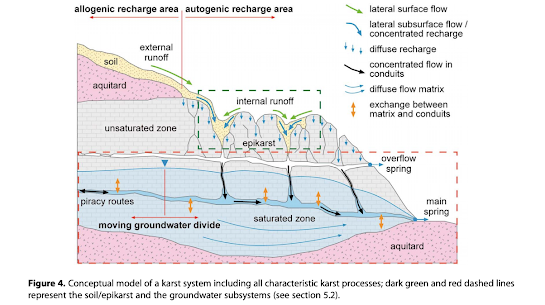 Precipitation falling into a karstic system can be divided into: