I found the below figure which I do not know the Author which I think can be useful to understand both what it is implied in writing a scientific paper and what is a theory, with respect to more simple analysis of data (or models, BTW). The first four arrangements of the data have some interest but, they do not capture much our interest. To do a gory example, is like to take an animal or a tree, separate them in parts and analyzing them from the point of view of the atoms it is made.  This information is real but it does not say anything crucial about the living being.  The being important think is realized when all the material is put together again (it would be great if the separation operation would be reversible) and it is analyzed in its “holistic” form and function. 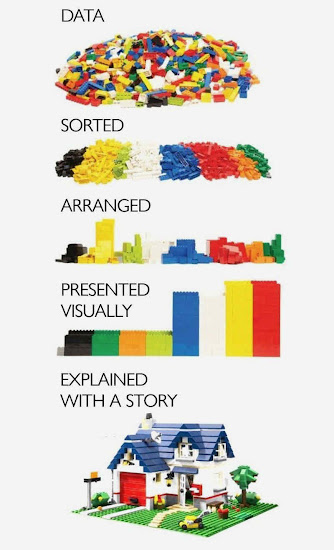 So, it is for the topic of a paper. Usually we have a problem and we dissect it using a “reductionist” approach, but we are not able to put again the whole together and make sense of it. The reductionist action is usually not trivial at all, as the figure could, on the contrary, suggest, and the Authors are usually exhausted after having applied the techniques for doing it which could be experimentally and/or mathematically very complex.  But writing the paper needs the vision of the whole, the story to tell, and the discovery, in the rough matter,  of the sense. It is not a bottom-up action but more a top-down one, where hypothesis and deduction comes before than induction.

Therefore in writing a paper, we should first have an idea of the whole functioning, trying to get a working a logic from the elements we have in hands and see if they fit. At the first trial they will probably don’t. Then we have to go back, refining our theory and trying again (and again).  After a while, the narrative, if we are patient and lucky, works. It is not necessary that it fully works. It is necessary that the final results is an appealing theory that can be further tested (or, better, falsified) in other cases and an improvement with respect to the actual knowledge. The steps forward are usually small.

Quadtree refinements are available for Modflow 6 models in the latest versions of Model Muse. This tool can be inplemented for many spatial objects as points, lines or polygons where you can specify the refinement level for each layer separately.

For new readers, WHETGEO stands for Water HEat and Transport in GEOframe. It is a set of models that deals with the processes in soils.

In a blog post, followed by a list-serv email, Prof. Rigon exclaimed,  “Digital Hydrologists from around the world unite! Nobody applied for this call”! His

Keith Beven (GS), answered to my previous post and I think it is relevant to bring to the knowledge of everyone his point of view: “Dear Riccardo, This